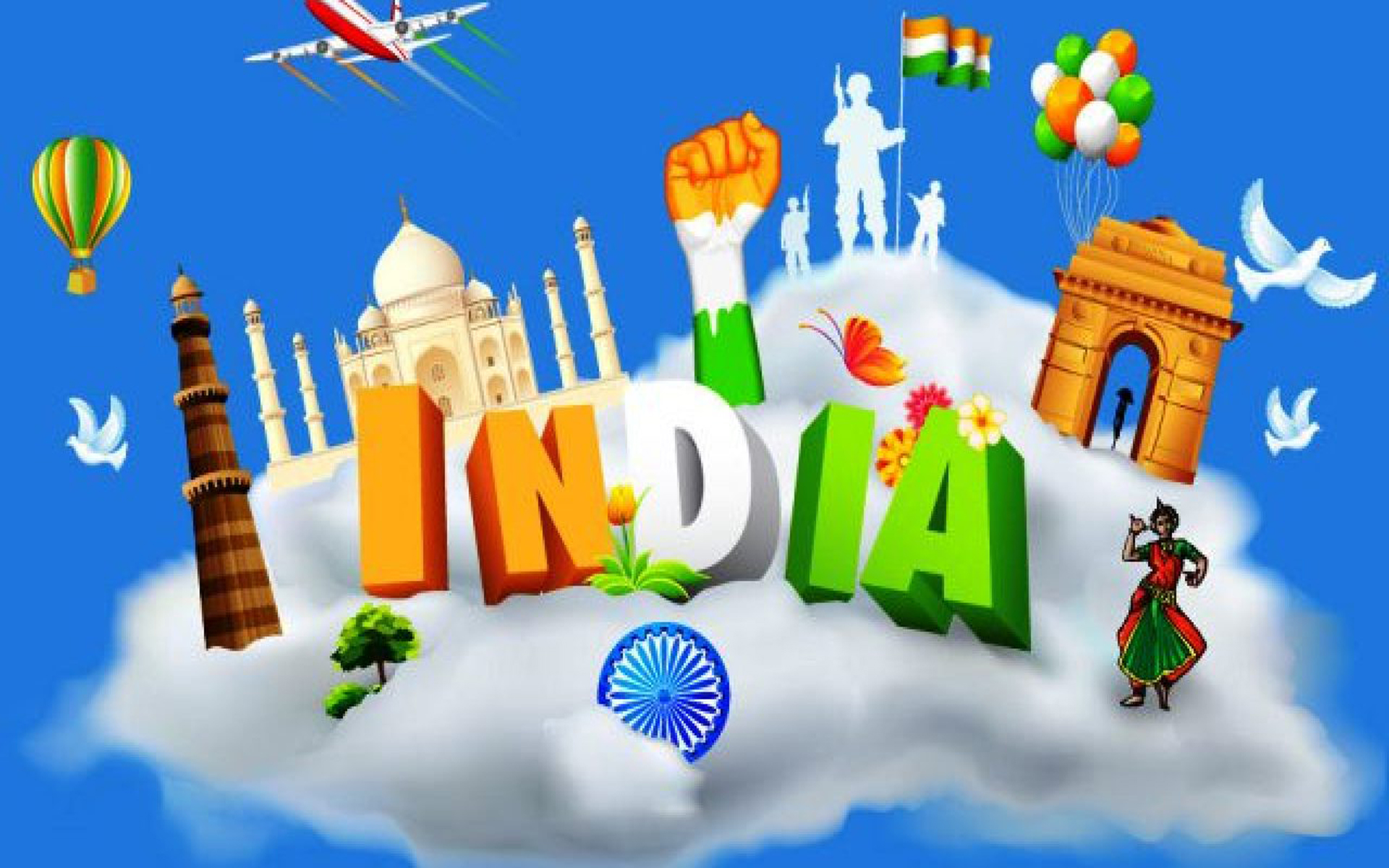 The India information given here is just an overview. For any further information about India, travel India or query, please feel free to contact us.

We plan and customize India tour itineraries to suit your needs, preferences & budget. Be it any budget, if it's about India, we have something for you.

Our drivers and service providers are professionals about India & very punctual and on their toes to make your travel, a memorable one!

You name it and we have it. Be it any place, budget or mean of transport you need in New Delhi, Jaipur, Agra or anywhere, we have it and provide it!

About INDIA – It’s a word which is very hard to explain in words. It is a country with such diversity that the words are too short for this. Diversity in cultures of various cities (For example the famous ones like New Delhi, Agra, Jaipur) traditions, dresses & clothes, believes, people, languages, landscapes, vegetation, climates, sports (though cricket is the god of all sports here), food, dances, architect, music, religion but still possesses a commonality. Hence it has a lot to offer to everyone of different age, sex, mentality, cultures, backgrounds and locations. India Information is as vast as it's existence. The more you travel here, the more you’ll fall in love with it. There are snow covered mountains and the sun washed beaches. One finds small villages without proper transport & electricity to high tech fully developed & commercialized big cities and business hubs dealing and even excelling in fields like IT, business, telecom and many more. Some places there are rich heritage forts, palaces & architect and some have cultural & religious temples, mosques & churches.

It is the common belief and saying in India- "ATITHI DEVO BHAVA" means that the guest is god (A very truly believed India information). This is deeply rooted in the minds and culture of Indians to respect & honor the guest and host relationship in an authentic and religious manner. It is also the tag line of the Ministry of Tourism (Government of India). This is the most commonly accepted fact about India.

That’s why it is truly said about India, by the famous travel guide book on India information - Lonely Planet-

“It’s hardly surprising that this country has been dubbed the worlds most multidimensional. Love it or loathe it, and most visitors see-saw between the two, India promises to jostle your entire being, and no matter where you go or what you do, it’s a place you’ll never forget.”

While we say that - It’s hardly surprising about India, that this country has been dubbed the worlds most multidimensional. Love it or loathe it, and most visitors, who have India information don't see-saw between the two, India promises to jostle your entire being, and no matter where you go or what you do, it’s a place you’ll never forget.

“NAMASTE” or “NAMASKAR” are the commonly spoken words in India for greeting and salutations to the people. This is even more famous in the Northern parts like New Delhi, Agra, Jaipur, Not only about India, it is commonly used all over India, Nepal & Sri Lanka. Though Namaskar is a more formal version of Namaste, both express deep respect & greetings.

About India & its Religions- India is one of the most religiously diversified countries of the world having Hinduism, Buddhism, Jainism, Sikhism, Muslim, Christianity and a big heart and room for all the religions. This India information helps the guests to adapt as we have & respect all religions, equally, in India.

About India & Family Systems- The Joint family system plays an important role in the Indian society. It is a system where the brothers, sisters, parents, kids, grandchildren etc. all stay together and generally the eldest member is the head of the family who takes decisions which are binding on all.

About India Festivals- Being a multi-cultural & multi religious society here people celebrates many festivals throughout the year like Holi (The festival of colors), Diwali (The festival of lights & crackers), Eid & Ramadan (Muslim festival), Gurupurb (Sikh festival), Christmas (Christian festival), Budhpurnima (Buddhist festival) and the list is endless, just like the India Information!

About India & Food - This India information will help you a lot while travelling. The multiple varieties of Indian cuisines are known and characterized by their unique and subtle use of spices and herbs & each place has a different flavor like New Delhi is more adaptive, Jaipur is more oily and spicy food. The spices and herbs are used to enhance the flavor of a dish and create a unique flavors & aromas. The majority of the Indian food comprises of vegetarian food. Each family or society or region has its own ways and techniques of making the food. Generally the food is spicy. Some of the famous dishes are like Thali (Combination of lentils, vegetables, Naan (bread), Curd, Paneer (dish with cheese) followed by a sweet dish like Kheer (made with milk, rice & sugar), Jalebi, Rasgulla etc. The famous snacks are Paneer Tikka, Chicken Tikka, Mushroom Tikka (these are specially roasted & made in a big earthen pot with flames at the bottom called as Tandoor)

About India Clothing- The two most common Indian clothing for women are the Indian Sarees and the Salwar Suits. These two are the most popular possession of the Indian females and are famous worldwide as a mark of Indian culture. For men the traditional clothes are Dhoti (long sheet of cloth tied at the waist) and Kurta (A long shirt, generally up to the knees). But the modern clothing comprises of jeans, t-shirts, shirts, tops etc. The interesting India information is that each region has its own distinct type of clothing which is trademarked with the name of the region. For example- Rajasthani clothes, Bengali style clothes, Odissi clothing etc. The Wedding dresses are generally very auspicious and well done with glitters, accessories etc. They are very heavy in general. The bridal dress is called as Lehanga & groom’s dress is called as Sherwani.

About India Languages- India is a country housing several hundreds of languages & dialects and some of them are Hindi, English, Punjabi, Bengali, Tamil, Telugu, Kannada, Urdu, Gujrati, Malaylam, Marathi, Maithali, Assamese, Udia, Nepali, Kashmiri, Rajasthani, Sindhi, Dogri and so on. Hindi is considered as India’s national & most widely spoken language.

About India Dances- India is a country with so many festivals and we believe that it is always in a dancing & singing mood. The people here need no reasons to dance & sing, be it birth celebrations, office parties, house parties, festivals, welcoming guests, and so on. The celebration always continues. Here bathroom singers are very famous and generally are found in every house. Indian diverse dances are of 2 types – Folk & Classical forms. The music varies vastly from Religious, Pop, Folk, Classical to Bollywood (Indian film industry). Generally all Bollywood (Indian cinema industry) movies have few music tracks and movies are considered to be incomplete without music & songs, dancing in different locations and changing several dresses throughout the movie. Does this India information surprise you?

About India & Art- The Indian paintings & architect goes way back thousands and thousands of years found in the Indus Valley civilization (2600-1900 BC). India houses some very beautiful, traditional and rare architectural structures comprising of Forts, Palaces in Jaipur, Udaipur and other parts of Rajasthan, MP etc, Taj Mahal in Agra (one among, The Wonders of the World), beautifully done and carved temples, mosques and other religious institutions, extremely intricate bronzes as well as temple carvings. Some huge shrines, such as the one at Ellora were not constructed by using blocks but carved out of solid rock. During the period of Gupta Empire & Maurya Empire many architectural & monumental complexes were made such as Ajanta & Ellora caves and Sanchi Stupa. The earliest Indian paintings were the rock paintings of the pre historic times and the paintings done on the walls of caves & houses. The most famous and commonly found Indian painting form is Rangoli. This is a freshly made flour painting found outside the common households of India, especially during the festivals.

About India & Sports- India is a country with wide varieties of sports played and is also a host of many international sports events like Cricket world cup, Hockey world cup, Common Wealth games and so on. The Chess is believed to be originated from India during the Gupta Empire. The Hockey is the national game and Cricket is believed to be the god of all games and is the most famous sport here. The other sports that originated from India are Kabaddi, Kho-Kho, Gilli Danda & Snake boat race.

About India & Movies- Indian cinema industry is named as Bollywood. It’s a Mumbai (just 2 hours flight from New Delhi/ Jaipur) based industry and is the world’s largest industry in producing and ticket selling. The films are made with all types of modern views and reviews and the topics ranges from romance, action, thriller, suspense, drama, religious, traditional, regional to classical. The Indian movies have been widely accepted and acclaimed throughout the world and in Oscars too.


We are always at your service, providing India information and tours. Email Us, WhatsApp Us or Use Facebook Messenger